Copy the notes from a songbook

You will need a songbook where only the melody is represented by staff notes, and where chord symbols (C, Am, F etc) are given for the accompaniment. This type of songbook is usually called a fakebook.

This tutorial does not include a complete course in note reading and in fact you don't really need to be able to read notes to work with Busker. Just copy what you see in the songbook to the staff lines on screen. This is done by dragging the tile with the corresponding symbol from the upper half on the screen to the correct place on the staff lines on the lower half of the screen. 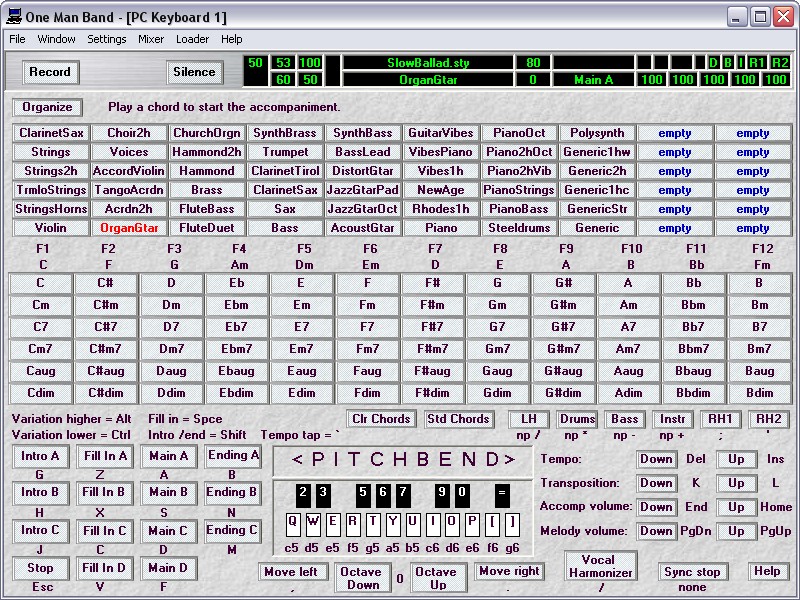 The first symbol on each set of staff lines should be the clef symbol as pictured here. If your songbook has clef symbols that look different from this then you might have the wrong type of songbook. You don't need to place this symbol, it is added automatically when you print the song.

The song starts with the metrum symbol. This indicates how many beats there are in each measure (space between the vertical barlines). If it has numbers different from the ones pictured here then select the one with question marks and enter the numbers after you dragged it to it's place.

The next symbol in the song is the key. It indicates that some notes should be played a semitone higher or lower (the black keys on a piano). Like the metrum this symbol is usually placed only once at the start of the song but it can change in the middle of some songs.

Then there are the notes. If you place a note to low or to high then drag it up or down. If you have selected the wrong note then drag it to the trash box to remove it. Alternatively you can press the right mouse button somewhere on the staff lines to hear a note (keep the Ctrl-, Shift- or Alt-key down to make it a flat, sharp or natural) and then (while the note still sounds) type 1 (full note) thru 6 (1/32 note) to insert a note. You can also right click on an existing note to hear it.

The sharp, flat and natural symbol must be placed directly before a note, changing it's pitch.

The dots should be placed directly after a note changing it's length.

These symbols mean that the previous key is no longer valid. It is usually followed by a new key.

The rests fill in the idle time between the notes.

These symbols indicate the start and the end of a repeated sequence. It is usually repeated two times but you can change the number of repeats after you dropped the repeat-end symbol on a barline.

Segno, Coda-begin, Coda-end and Fine symbol. These are markers for complex repeat and jump actions. Place them above the staff in the same way as in your songbook.

These double barlines indicate the boundaries between different song parts and have no function in Busker.

Chord must be attached to notes and rests. In rare occasions it can be that the chord should change halfway a note or rest. In that case you should split the note in two (shorter) notes, put a connection symbol between them and drag a chord to each note. You can make accompaniment without melody in Busker but that means that you will have to add rest symbols of the right lenght and connect the chords to them. By the way if you're looking for Ab, it's the same as G#.

After clicking on the lyrics button an empty text field will appear beneath the first note.

You can enter the first syllable of the song that corresponds to the first note. And then press enter. Now there will appear an empty text field under the second note and so on.

Put a space and a hyphen at the end of each syllable unless it is at the end of the word. Like this:
syl -
la -
bles
This will look better in the song and Busker will highlight the syllables correctly (without hyphens) in the karaoke text.

When you accidently skipped a note and the words no longer match the notes the you can shift all the lyrics (starting from the currently active text field) one note to the right with Ctrl-End. Shift the line one note to the left with Ctrl-Home. Remember you must be editing a text field to be able to this.

Use menu edit/duplicate-lyrics to copy a line of lyrics.

When playing the song the karaoke text will display text from the linenumber corresponding with the current repeat number. Therefor after a repeated sequence the text on line 2 (played the second time) should continue on line 1 (played for the first time).

This is how the song looks when you print it:

Back to the Busker main page.